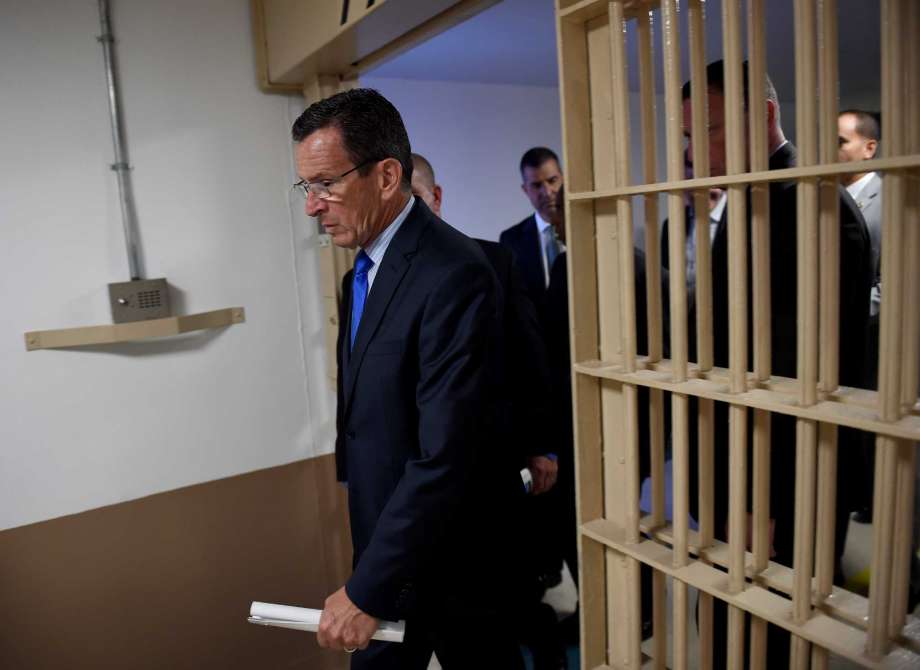 Four inmates who are close to their release dates got an employment lesson on Wednesday from someone whose job includes meeting people every day: Gov. Dannel P. Malloy.

Look prospective employers in the eye when you shake their hands, Malloy said, during a visit to the 780-bed New Haven Correctional Center, where he announced a new job training program as part of the state’s “Second Chance Society” initiatives.

He was joined by state Department of Correction Commissioner Scott Semple.

“We want to make sure that we have the kinds of programs in place to make it less likely that you’ll return,” Malloy told the inmates, sitting in a semi-circle with Warden Joe Feliciano Jr. and Semple. “You need to get a job. If you have a drug problem, you need to stay off drugs.”

The four tan-clad inmates, with black, DOC-issued work boots, were selected to talk with the governor because they had a history of employment. One inmate, a 54-year-old truck driver from Bloomfield who is seven months into a nine-month imprisonment, said previous felony convictions have resulted in diminishing job opportunities. He has had some college, but employers would rather take less-educated applicants without a criminal record.

“Society is tough on people,” Malloy said during his first visit to the jail. “You know and I know — drugs, alcohol, lack of education, traumas that were inflicted on people when they were young, we need to do a better job of heading that off and that’s what we’ve got to get back to before you end up with a felony record. We have to develop a society that’s a little more forgiving and you’ve got to fly right.”

The inmates will be assessed for skills and learn interview techniques and how to prepare a resume, among other skills. The nonprofit Workforce Alliance was awarded a $1 million contract for the jail program, which will open in February and serve about 175 inmates who are within six months of finishing their terms. They will be placed in jobs in the 30-town south-central region of the state.

William P. Villano, president and CEO of Workforce Alliance, said the organization has been working on re-entry issues since 2003 and will create individual plans for each participating inmate. The organization currently helps ex-offenders in Bridgeport. Earlier this year, the General Assembly approved much of Malloy’s proposed “Second Chance Society” initiatives, including housing for ex-offenders and turning drug-possession charges into misdemeanors.

“Each one of you has a good story to tell and a bad story to tell,” Malloy said during a 15-minute visit with the inmates from throughout the state. “Everyone assumes they know the bad story. What we’ve got to do is convey what the good story is, on a broader basis.”

The populations of local jails, including ones in New Haven and Bridgeport, include about 16 percent awaiting trial, with the majority of offenders serving shorter sentences, at the per-inmate price of $120 a day.

Malloy expects the job-training program to expand throughout the state. Semple said there is a similar program already offering inmates who are veterans employment skills in the Cybulski Reintegration Center in Enfield.

Malloy said he wants more employers to give those coming out of prison a chance.

“What we need to do is create a climate where we understand that people who live in Connecticut are your responsibility. We’re all one another’s responsibility here,” Malloy told reporters. “If you’re going to serve doughnuts and coffee, then give somebody coming out of jail a shot at that. Some of the most grateful employees in the world are people who got jobs coming out of jail.”